At certain times of year there are special Holiday Events. This page is a list of past events and what happened during them.

This event lasted from October 16th at midnight to November 1st at noon, 2012. Prizes could be redeemed until November 2.

Players collected Candy Corn and turned them in for prizes on the Trick or Treat page. Candy Corn could be gotten via hitting the Loot Pinata, contests or by clicking. There were four tiers of candy corn ranging from tier one (T1) to tier four (T4) with tier four candy being the rarest. Candy Corn is a food item that can be eaten by pets level 95 or higher.

The Loot pinata gives out 1-4 candy corn, typically averaging 2-3. Each swing at the pinata costs three times more than the one before it. It used to be five times, but Kristen lowered it to make it more accessible to all. As it got closer to Halloween more tier 4 candy corn began to appear more frequently. Hitting the Pinata also showed a funny image of a broken knocked out pinata.

Contests were changed to require more pets to run unless the contest was level 30 or higher. If a pet took second place it won one piece of random candy corn as well as whatever prize money and XP it won from the contest. Contests were by far the most popular way to earn Candy Corn as it was faster than clicking and always returned something for your time, provided you Trained your pets first.

Each pet also gained a pumpkin icon next to their feed and play icons. Clicking the pumpkin icon would result in candy corn about 5% of the time, a random event item 10% of the time, and nothing the rest of the time. This method was the slowest way to get candy corn, but popular among those who did not train their pets.

October 30th to November 1st candy corn also could come from all quests except the Cruel Task Master. This replaced all normal money and item rewards, though any stat gains and XP gains happened normally. The best quests for this were Old Master and Signpost as both quests require only one item that typically costs under 2,000 gold.

Each Tier of Candy Corn could only be redeemed for prizes in that Tier.

Candy Corn was automatically consumed based on how many you have of each type in a tier. It was consumed from MOST TO LEAST.

For example, let's say you wanted a Suffused Talisman. That's 5 Tier 1 Candy Corns. You had 3 Spring, 3 Freedom and 1 HeartThrob. Your 3 Springs would be taken first (5-3 = 2), then 2 Freedom would be taken. This would leave you with 1 Freedom and your HeartThorb.

When a special Candy Corn type was needed, one of that special candy was taken and it was deducted before any others.

CandyCorn art was donated by ShinyGusteon. It's unknown who made the pumpkin icon because they didn't put a name on their art submission.

Prizes
Note: Star gems were 5 candies at first and each required a particular candy corn type to buy, but there was a glitch in the script that caused all of the needed candy corn to vanish sometimes. As Kristen couldn't figure out a fix, she removed the specific candy corn requirements and raised the price to make up for it.

This event took place from the 1st through to the 25th of December 2012.

Return of the Loot Pinata. Each hit gave around 2-4 items including Carved items, Special items (Burning Blood Trinkets, Abundance Trinkets, Ancient Tomes, Maternal Fortitude and more..), Holiday Paintbrushes and even Birth Certificates (Kitsune and Kirin). Each swing at the pinata costed three times more than the one before it (eg. $1,000 first hit, $3,000 second hit, $9,000 third hit). The cost reset back to $1,000 at midnight EST each day. 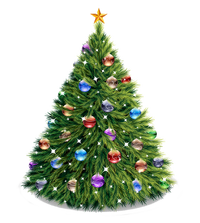 Until Christmas day players were able to place presents under the tree for other players. The prices of the presents were based on a % of your total money. You needed at least $25,000 to purchase gifts.

Starting December 25th and ending January 1st, you could visit the tree to pick up presents. You could pick up one present per gift you put under the tree earlier in the event. Presents were chosen by clicking the boxes that appeared at the bottom of the screen.

A random gift would then be assigned to the player's inventory. Refreshing the page or clicking the "Get more gifts" link would result in three new boxes and three new chances for gifts as long as the player still has gifts to gather.

Retrieved from "https://celestialvale.fandom.com/wiki/Holiday_Events?oldid=5858"
Community content is available under CC-BY-SA unless otherwise noted.